Since we were kids, we’ve always drawn and written a lot – and although the pen looks nice and formal, there’s nothing quite like using the pencil. Some say it’s old school, others say it’s simply for school.

But no matter what your stance on them, pencils are here to stay. Fun fact: there are more pencils used in the United States each year than there are grains of sand in San Diego. Can we verify that one? Not sure. But it sounds good.

If you’re looking for the best sharpener, chances are good you already know the difference between using something sub-par and using something that’s above average, and that’s why you’re here. Turns out, that’s why we’re here too.

We’re big fans of the “buy once, cry once” philosophy. So sure, you might spend $25 or more on a pencil sharpener, but you’ll be able to sharpen so many pencils with that nice machine that your hands will start to hurt and you’ll be forced to wear a carpal tunnel wrist brace at night, then pretty soon you wear it during the day too and people start to wonder what kind of hobbies you have that makes your wrist so fragile.

We digress. You can see the importance of a good sharpener, so we’ll leave it at that. When we were shopping around, we wanted something durable, consistent and quiet – there’s nothing we dislike more than a noisy sharpener, especially since we have two newborn babies at the time of this review. If you’re reading this in the future, they’re probably a little bit older but still, who wants a loud pencil sharpener?

To see our reviews for the best electric pencil sharpeners for home, office or artist use, check out the detailed breakdown below.

What to Look for in Your Electric Pencil Sharpener 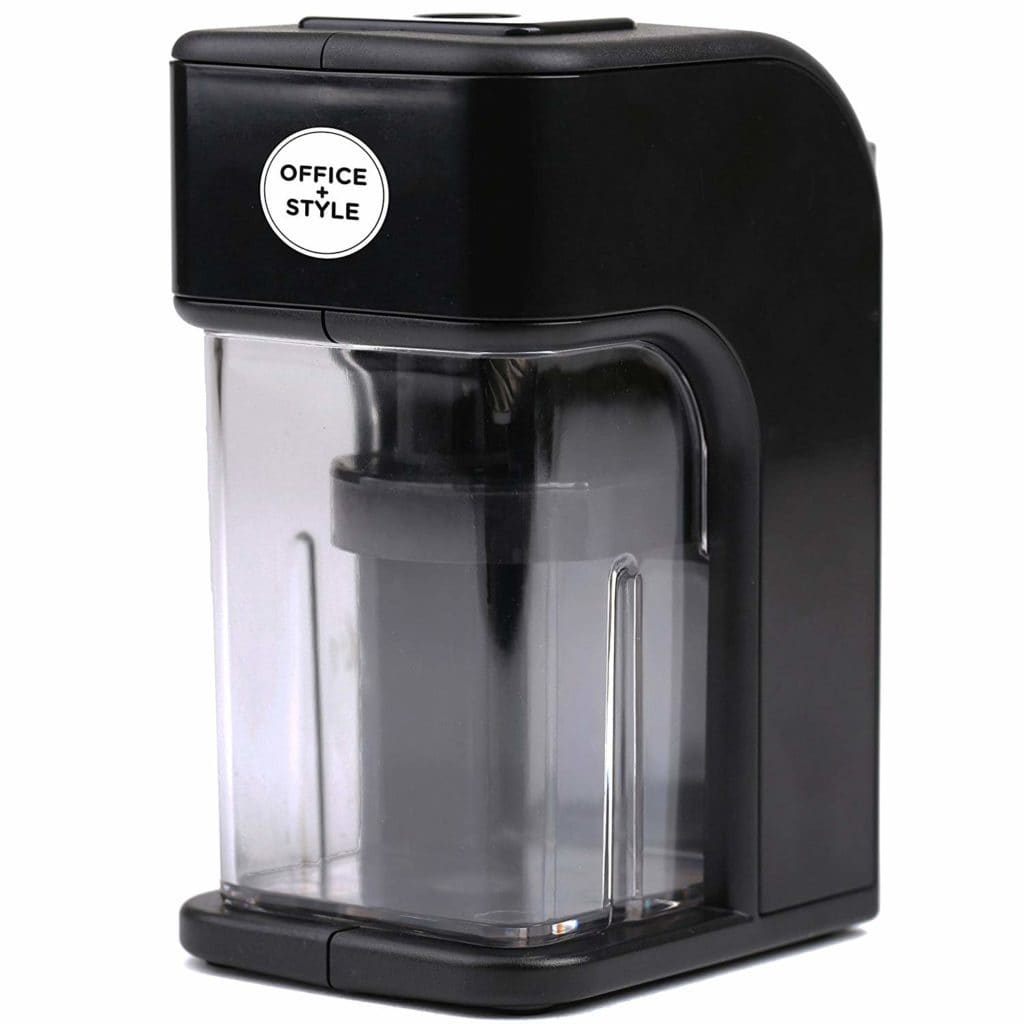 Nothing makes us more irritated than an electric pencil sharpener that only does a half-you-know-what job.

That’s why we like the Office Style Electronic Pencil Sharpener so much. It’s often considered the Clydesdale of pencil sharpeners and for good reason.

The sharpener uses titanium blades that, if they were used for finger cutting, would cut off so many fingers that there would be an epidemic of people walking around finger-less, but no one would mind because they would all be so impressed with the finger cutting prowess of the Office Style.

Luckily, this isn’t the case, and instead, we focus on sharpening pencils. This bad boy has an auto-stop feature and a nice big clear storage compartment for pencil sheddings. You may wonder why we call them sheddings instead of shavings, and the reason is that we like to think of pencils as little animals and the stuff that comes off of them as fur or hair, so it makes us laugh to say sheddings instead of shavings. But it’s all really the same thing.

It comes in black, pink and green, so you can choose one that meets (or goes against) gender norms, or find something neutral for the kids belonging to all those Millennial parents that are just so into that sort of thing. Anyway.

It may not be as sleek as some of the other sharpeners, but we’ve found that after many hours of use, the blades are still sharp and the machine still spits out pencils just like it was new. Because of its consistent performance over time and quality construction, it is our top pick. 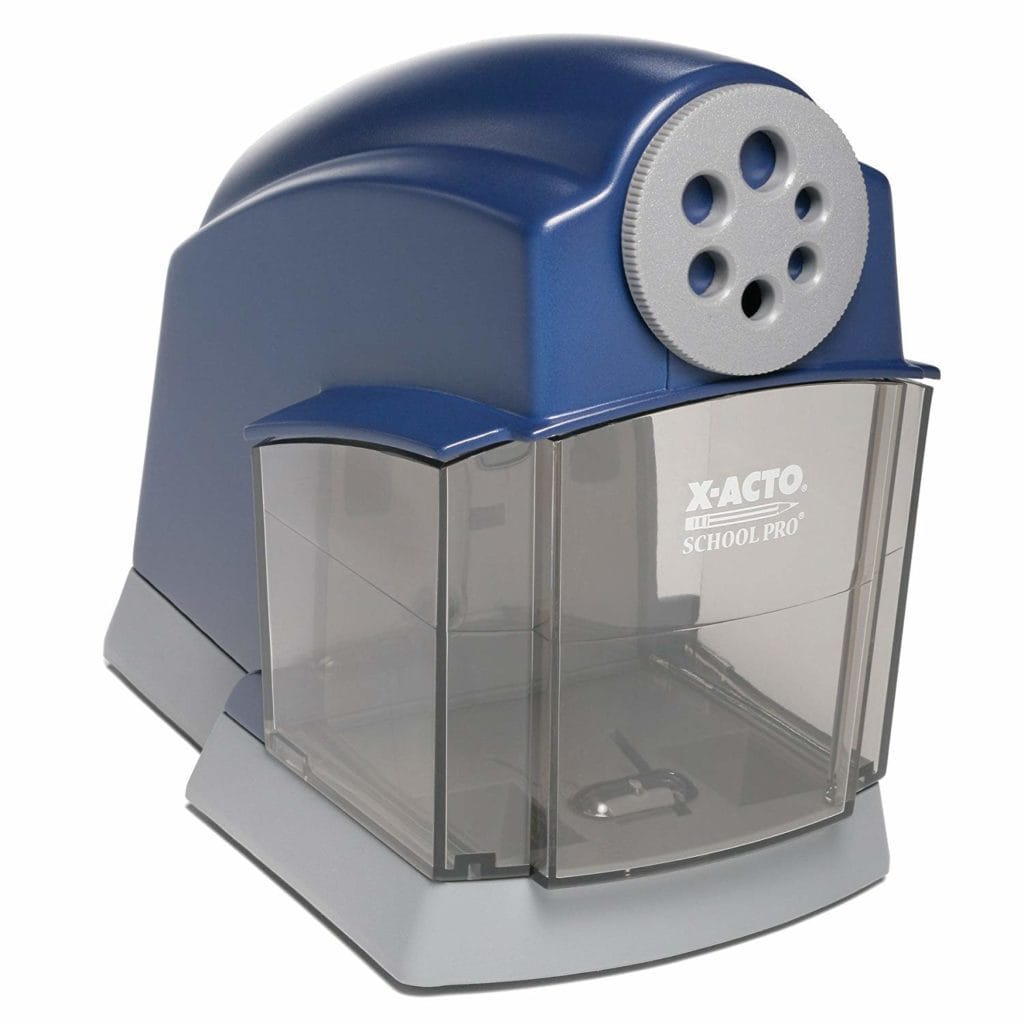 Just when you think you know everything about pencil sharpeners, BOOM – here comes X-Acto out of right field.

We say right field because the left field would suggest that it came out of nowhere, but really they’ve been making great machines for a while now, so by saying right field, we sort of mean it’s new (-ish) to us, but they’ve been here before. This isn’t their first pencil sharpening rodeo.

The 1670 is great because it offers a few different sizes for all sorts of pencils, which is handy if you’re a teacher or artist who uses a variety of penciling utensils.

One of the main benefits of 1670 is that it produces slightly rounded tips, although they are still sharp. What this means is that if you are a teacher or someone else responsible for making sure students don’t stab themselves or others, this can make your job slightly easier by making it slightly more difficult for a pencil stabbing to occur. Though there’s always a chance, no matter how blunt the object.

This sharpener was made specifically for classrooms and includes a larger than average storage area for pencil shavings so that it doesn’t need to be emptied out as often as other electric sharpeners. It’s quiet and handles a variety of materials, including wood and composite, so that no matter what kind of pencils you’re little freak kids are using, chances are good that this bad boy will sharpen them.

The X-Acto also protects against over-sharpening, and its wide base makes its sturdy and great to use for kids. 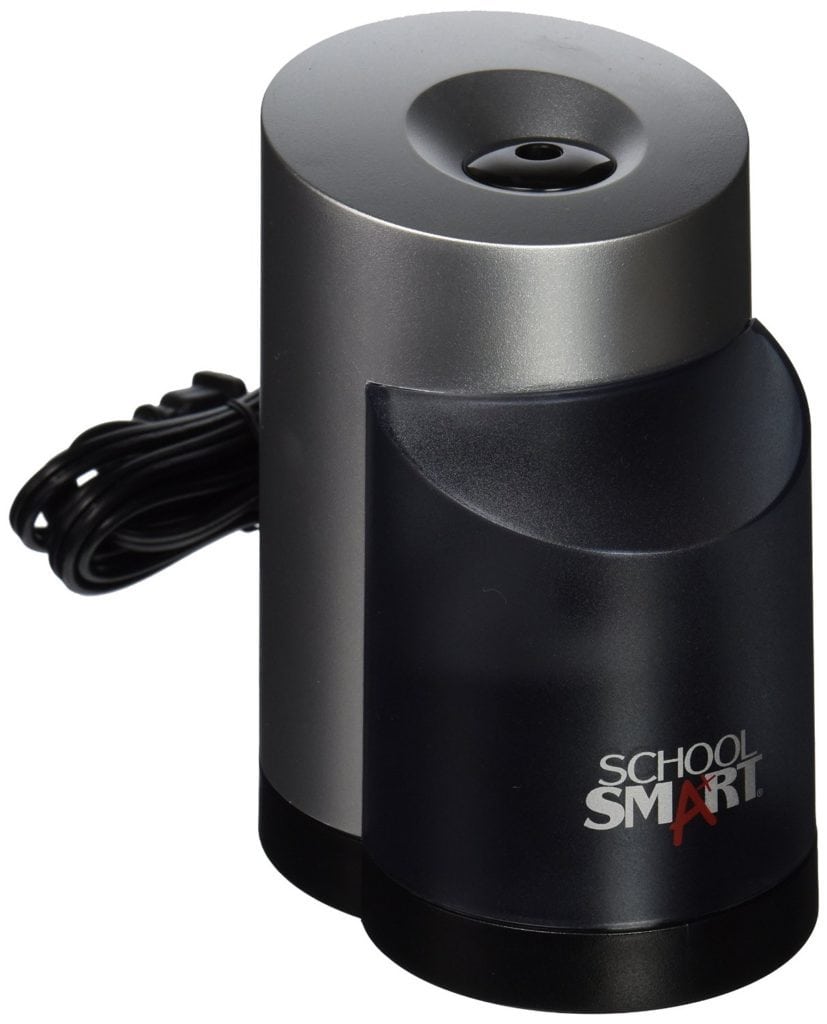 We wanted to mix things up a bit so here’s a vertical sharpener from School Smart that is focused on power sharpening.

Unlike the larger sharpeners, this one has to be emptied out a little more often, but in exchange, you get extremely sharpened pencils that are ready to draw, write or do whatever it is you do with pencils.

It’s not recommended as much for classroom settings because of its size and sharpness rating, but it’s perfect for the artist or home office worker who needs consistently sharp pencils, all the time.

Also, it’s a great space saver for those who have tight desk quarters or just need something small and sleek. 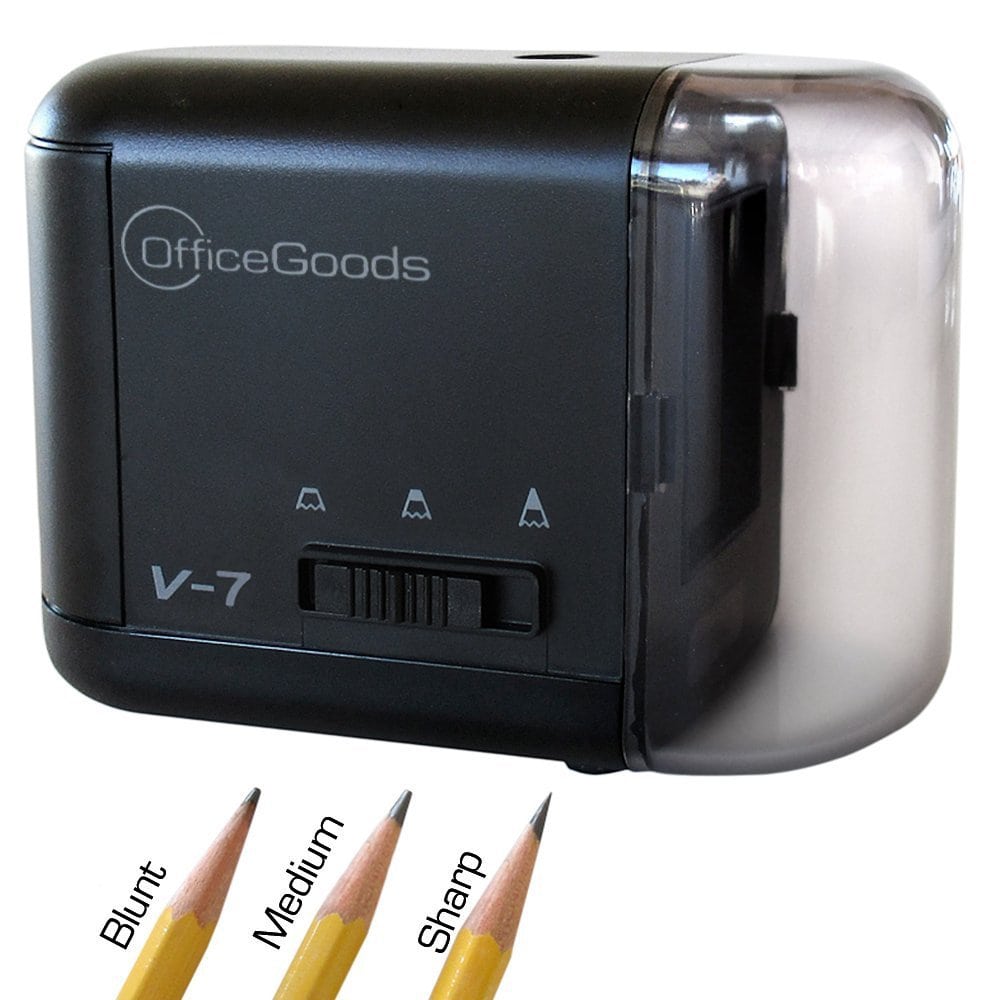 If reliability and consistency are your big things in life, you’ll probably enjoy the OfficeGoods pencil sharpener.

Is it winning any design awards? Probably not. But is it sharpening literally thousands of pencils every day across the country? Most likely, though we don’t have exact statistics.

The OfficeGoods sharpener prides itself on consistent sharp points and overall performance, and it gives you several options for how sharp you want things to get.

It’s a classroom favorite because it’s a no-frills machine that gets to the point (excuse the pun). It’s also extremely convenient for moving around – it can be powered by batteries, an A/C adapter and even a USB cord. So even if you’re in the middle of nowhere and need sharp pencils, the OfficeGoods sharpener can do its thing. Assuming you have some batteries.

The only thing that doesn’t charge this pencil sharpener is solar power, wind power, coal, and mind-energy. But that’s a whole other conversation.

Best of all, OfficeGoods offers a 100% satisfaction guarantee, and we have no reason to doubt that this is real. So if you want something you know will be around for you, your kids and potentially your grandkids, then the OfficeGoods electric pencil sharpener may be your best bet. We can totally picture you and your family in the future using this thing, even at a time when pencils are just not really in style anymore, but they are just there sort of hanging out the way a lot of things (and people) from the ’90s do. 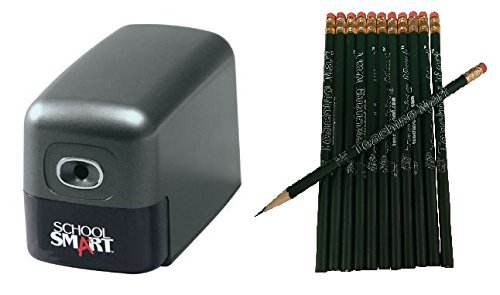 If you’ve paid any attention to recent Amazon trending books or cultural trends in general, you may have seen that adult coloring books are all the rage and seem to be the only way grown people can get out their stress in a natural, healthy way. Godspeed people.

For those of you who are into the adult coloring book stuff, or if you have kids that really love colored pencil sharpeners, the School Smart Electric Pencil Sharpener may be the way to go.

It can sharpen any pencil like a pro, but it does particularly well with colored pencils, which makes it a great sharpener for artists and school kids who color a lot.

This one also comes with a pack of pencils so you have something to start with.

The beauty of this sharpener is also in its ease of use. It has an automatic stop so that your pencils will never go beyond what they need to in terms of sharpness, and it has a wide base so that it won’t tip, which is especially helpful if its used in a classroom or other setting with lots of small clumsy people who still haven’t perfected their motor skills.

It also prevents itself from overheating, so you won’t have any of the issues that make today’s hoverboards so dangerous. In fact, these pencil sharpeners may go so far as to be “not dangerous,” under normal use.

If you’re looking for a standard workhorse, this is your pencil sharpener. Good for kids, good for adults and built to last. Also has enough features that it’s easy to use for just about anyone, even grandma, the one who is still getting used to this new fangled idea of colored pencils to begin with.

She’s sort of the traditionalist who thinks that if it’s not a standard number two pencil, she doesn’t want it in her hands. And we can’t blame her, though we would try to convince her that things are different now. But we all know how those conversations end. 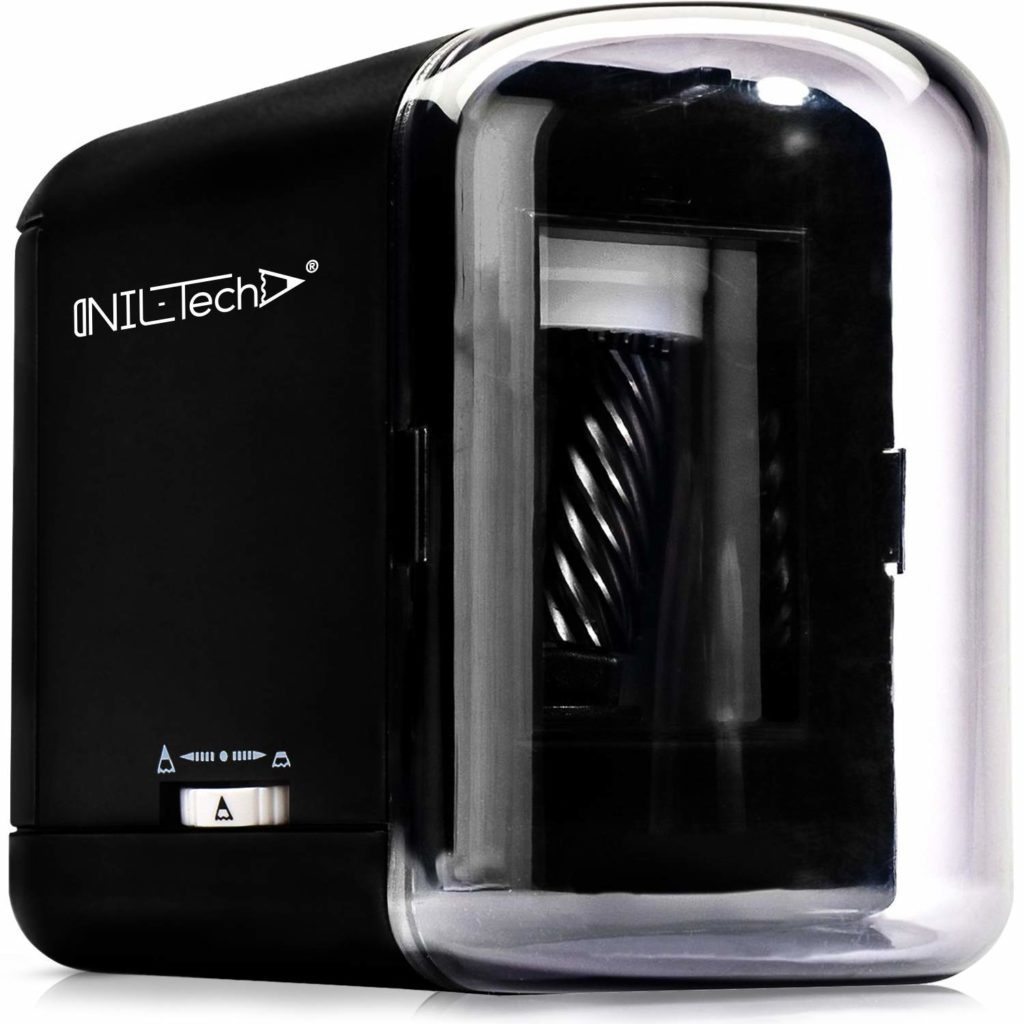 This pencil sharpener is your basic “do it all” machine. Nothing, in particular, stands out, but it offers a little bit of everything, so if you’re concerned with safety, convenience, options, and durability, this one ranks high on all accounts.

The company offers a full guarantee, and the sharpener features many of the same safety benefits as the others – auto-stop, prevention of too-sharp points and so on.

So although it’s not blowing anyone away with one particular feature, it offers an all-around pencil sharpening experience that seems to impress a lot of users, and who are we to disagree?

Did we miss an electric pencil sharpener that you recommend? 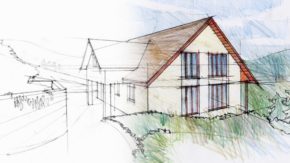 Perspective drawing can be hard, but this tutorial shows you how with easy steps! 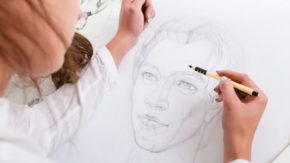 If you feel that your art needs some work then try these drawing exercises to foster improvement in your pieces. These exercises are easy and fun!

An in-depth analysis of what hues, tints, and shades really are and how they affect us in our everyday lives. 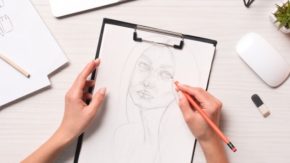 A detailed breakdown and explanation of the best tips for beginners wanting to learn sketching.